We’re glad you’re here!   Did you know… Our staff and a network of knowledgeable skincare gurus test all new formulations before they go into official production? That’s right, we will never sell you a product that we don’t personally believe in. Get $5 Off your next purchase with discount code SAVE5NOW   Visit Shop Now       *All bundles are excluded Read More
So Many Exciting Things To Share! Lower Prices The First (and we think the best) announcement is we’ve done some reorganizing within our business that has allowed us to drive product prices down. Visit Our Shop to take a look at our new lower prices!  New Promo Secondly – If you haven’t tried it yet, our Bio Stem Cell Read More 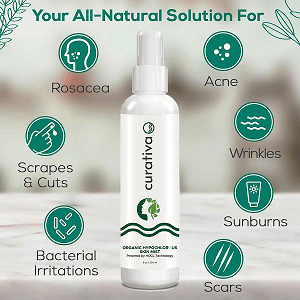 Here at Curativa Bay, we have a mission to spread the word about Hypochlorous Acid (HOCL) and its many applications—from anti-aging and skin softening to its amazing healing and anti-microbial properties. Out top-of-the-line moisturizers and facial scrubs utilize very weak acid that is terrific for cleansing the skin without causing dryness or irritation. Your skin will feel like silk after Read More
Cannabidiol (CBD), and the Endocannabinoid System (ECS) The endocannabinoid system Cannabinoids are complex chemical compounds that act on receptors in cells. Similar to the hemp plant, which produces over 100 different cannabinoids (or Phyto cannabinoids), the mammalian body also naturally produces cannabinoids (or endocannabinoids). Within each and every mammal exists an Endocannabinoid System (ECS), which is comprised of a series Read More
Hypochlorous Acid is often referred to as “Nature’s Miracle” Don’t you want to understand why and how it could help your whole family live healthier lives !!!! Everyone needs to know what this natural skin spray is capable of providing and we are here to answer questions. Yes… we are a company who still loves to talk to our customers. Read More
Alfred Granite, DDS, PhD CTO Curativa Bay Inc. Hypochlorous Acid is made naturally in human white blood cells (neutrophils) and is a key part of the body’s internal defense mechanism. Although Hypochlorous Acid is not widely known, it was discovered more than 100 years ago by scientists. It works as the first line of defense at wound sites to fight infections. Read More
By Alfred Granite, DDS, PhD CTO With all the choices of skincare and cosmetic products it is difficult to know which is best. Ultimately, it boils down to a matter of what works best for you. However, it is also important to consider how a particular preparation is made. At Curativa Bay we start with the highest quality Naturally derived Read More
On the face of it this may seem like a logical statement, but the truth is somewhat more complicated. What has to be realized is that all living things evolved from the same primitive life forms be they plant or animal. All of these formed in the ancient oceans and eventually transformed to terrestrial species. Careful inspection of the metabolic Read More
As we look for the perfect ingredients to protect and rejuvenate our bodies we should invariably look to the past…our beginning’s. Let us not forget that we arose from the sea.  Even today, as we look at the human body we can see traces of our evolution. For example, our own blood plasma resembles the same chemical composition as the Read More
Dr. Alfred Granite DDS PhD Microbiology Curativa Bay CTO One of the concerns that arise from Acne treatment is the thinning and drying of facial epithelium, which can imitate aging. Remember that in addition the antibacterial action of HOCl, it also promotes and accelerates healing of the skin everywhere on the body. There have been many reports of remarkable healing Read More
﻿﻿﻿